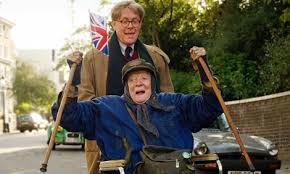 The Lady In The Van

The film tells the true story of the relationship between Alan Bennett and the singular Miss Shepherd, a woman of uncertain origins who ‘temporarily’ parked her van in Bennett’s London driveway and proceeded to live there for 15 years. Their unique story is funny, poignant and life-affirming.

Maggie Smith has been nominated for a BAFTA for Leading Actress, and a Golden Globe for Best Performance by an Actress in a Motion Picture – Musical or Comedy. Maggie Smith was also the winner of Best Actress at London’s Evening Standard Film Awards.

“Figuring out what is true and what isn’t is one of the pleasures of “The Lady in the Van,” but the foremost one is watching Maggie Smith gloriously reprising her acclaimed stage performance.” 4 stars – Frank Scheck, Hollywood Reporter