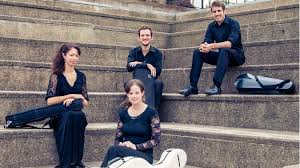 Additionally their players have played with several smaller groups including the Scottish Ensemble and the Scottish Chamber Music Players. They have also worked with various leading musicians including Vladimir Ashkenazy, Andrea Bocelli, Ilya Gringolts, Julian Lloyd Webber, Colin Carr, and have received tutelage from the Lindsay, Brodsky, Chilingirian and Maggini Quartets.

Their collective and individual experience of performing chamber music across the UK and abroad features appearances at festivals including St Magnus Festival, Mendelssohn on Mull, S-o-u-n-d, Sound-Thought, Edinburgh International, Schleswig-Holstein and Musique-Cordiale. The players have performed in various countries including Germany, Italy, France, Norway and Mauritius.

They have various other related interests and commitments ranging from Baroque performance (on both the violin, cello and Swedish-keyed fiddle), traditional Scandinavian music and dancing, to experimental classical music and modern theatre installations. They also work for RCS MusicWorks and Live Music Now Scotland which connects the elderly and disadvantaged young with live music.

This concert is supported with funding from Enterprise Music Scotland.

“Haydn’s “Sunrise” Quartet (Op 76 no 4) happens to have an apt nickname for a concert opener and Sinopia’s freshness and spontaneity were a sure match for its every mood. With Frank Bridge’s Three Idylls (Op 67) the craftsmanship and assurance of the mature Classical master was replaced by a shifting tonal canvas of different textures and expressive characters from the early Twentieth Century – quite modern music for its Edwardian times and here most sympathetically explored and expounded.

After the interval, listening to Schubert’s monumental “Death and the Maiden” Quartet (Op 14) it was difficult not to reflect that the composer’s most sublime and beguiling effects can often be achieved only by stretching every limit of his interpreters’ abilities. Most appropriately, then, it turns out that Sinopia is actually the name of a dark reddish-brown natural earth pigment, widely used from classical antiquity to the Renaissance. The Italian painter and writer Cennino Cennini described it thus: “ ….and this colour is lean in character. It stands working up well; for the more it is worked up, the finer it becomes”.

Schubert’s whirlwind finale certainly had these players fairly worked up by the time they finished, but the result was pretty damn fine.” – Howard Duthie, The Strathearn Herald
[/one_half]
[one_half spacing=”yes” last=”yes”] 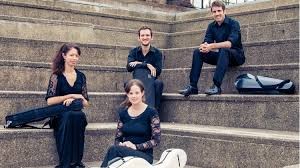